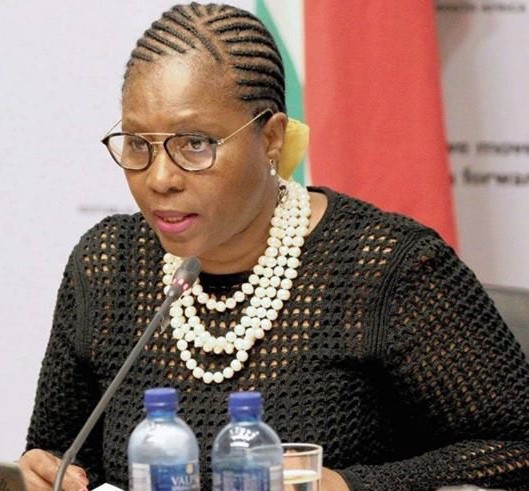 Speaking at the launch, the Minister said: “any anti-corruption and professionalization initiative must allow employees to blow the whistle on corruption and for the protection of whistle-blowers.

“The death of the late public servant, Ms Babita Deokaran highlights the imperative to increase awareness amongst employees on whistle-blowing, to bolster early detection of corruption and criminal conduct.” The Minister said.

Minister Dlodlo said one of the vehicles identified in the plan to address corruption is a resilient anti-corruption system, which will successfully detect and investigate cases of corruption, with a view to prosecute, convict and incarcerate perpetrators, and that cooperation between the Unit, law enforcement and other relevant agencies are key to identify public administration employees involved in corruption.

The Minister said utilising this system to coordinate anti-corruption efforts, significant strides were made and these includes addressing those public servants involved in corrupt activities.

“Although they are only a handful of bad apples, we cannot allow this group to spoil the barrel.

“This newly established Unit has no criminal jurisdiction or investigative mandate, but, as part of the Anti-Corruption Task Team, it collectively contributes to the fight against corruption.

“This collective effort is expressed in the concluding of agreements and Memorandums of Understating (MOUs) with the Special Investigating Unit, Financial Intelligence Centre, South African Police Service, National Prosecuting Authority and Auditor-General to improve the sharing of information on corruption so as to improve detection and prevention efforts,” Minister Dlodlo said.

According to the Minister, the Unit plays a critical role to follow up with national and provincial departments on criminal cases reported to the police, and to ensure that the necessary disciplinary steps are taken.

She said working together as a collective within the Anti-Corruption Task Team, the Unit has assisted in turning the tide on employees conducting business with the state.

“When the DPSA first started to monitor this in 2017, approximately 8500 employees were listed as suppliers on the Central Supplier Database.

“As the end of July 2021, this amount stands at 96, and is interrogated to ensure no contracts are concluded with these employees.

“The South African Police Service (SAPS), National Prosecuting Authority (NPA) and Department of Public Service and Administration (DPSA) team, whilst working on this issue, identified 17 priority cases for investigation, of which one case is already enrolled to court.

“The Unit is also following up with departments to assess the steps taken against culprits and to support further action.

“This sends a clear message: public administration employees are not allowed to conduct business with the State and in terms of the Public Administration Management Act, this is a criminal offence,” Minister further said.

The Unit has no criminal jurisdiction, and it does not have a mandate to investigate, but by referring reported corruption and unethical cases to relevant entities for investigation, the Unit will play a role to ensure criminality in the Public Administration is detected.

Minister Dlodlo said the Unit is an important instrument to address corruption, fraud and unethical conduct in the Public Administration, adding that government is committed to eradicate corruption.

She further said that the cost of corruption to citizens must be quantified.

“This is to contribute to the building of an ethical leadership, to professionalise the public administration, and to establish a culture of reporting and whistleblowing. The main aim of the unit is to institutionalize ethical conduct in the Public Administration.

Nthambeleni Gabara - Modified date: December 21, 2020
0
In an effort to curb the rising covid-19 infections, employers are expected to ensure that their employees are wearing masks while performing their duties. The...

Update on Public Servants Wage and Other Conditions of Service Negotiations