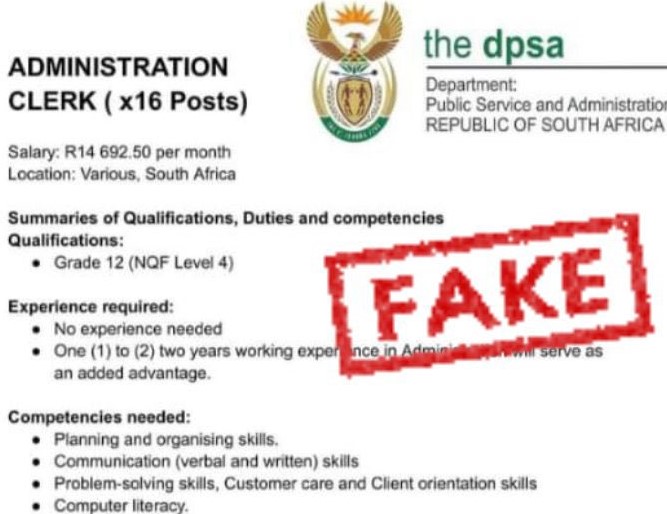 While government jobs are not for sale in the country, Ms Makhasi said the DPSA want to caution the public about the fraudulent activities being perpetrated in the name of the department.

In a statement released on Monday, she said the DPSA has become aware of correspondences, being circulated from internet websites, social media and via e-mail falsely stating that the department has launched an online application portal for interested applicants who want to serve as ad-hoc staff.

The scam may be seeking to obtain money or personal details from innocent unsuspecting citizens who may be recipients of such messages from the perpetrators.

In their fraudulent communique, the scammers referred to the DPSA as a Commission and wrote in capital letters: “interested and eligible applicants who are willing to apply for the recruitment are to visit the portal”: https://dpsa.programs.agency/

In setting the record straight, DPSA Director-General, Ms Yoliswa Makhasi said: “We are not aware of this fraudulent portal; therefore, we want to plead with South Africans to exercise extreme caution when they receive this fraudulent correspondence.

“Vacant posts in the public service are advertised on the Public Service Vacancy Circular (PSVC) which is found on the DPSA website: www.dpsa.gov.za.

“The PSVC is the only portal where government posts are advertised with instructions on how to apply for advertised posts always contained in the vacancy circular.

“We want to reiterate that there has not been any other online portal unveiled by the DPSA. If you have received such fraudulent correspondence, we humbly request that you terminate all further contacts with the sender.”

Ms Makhasi further urged victims of such scams to report them to their nearest police stations or to the National Anti-Corruption Hotline on 0800 701 701 for appropriate action.

Third wave of Covid-19 is upon us-Pres Ramaphosa

Nthambeleni Gabara - Modified date: June 17, 2021
0
South Africa is in a third wave of the deadly coronavirus infections, says President Cyril Ramaphosa while addressing the nation on the developments in...
title