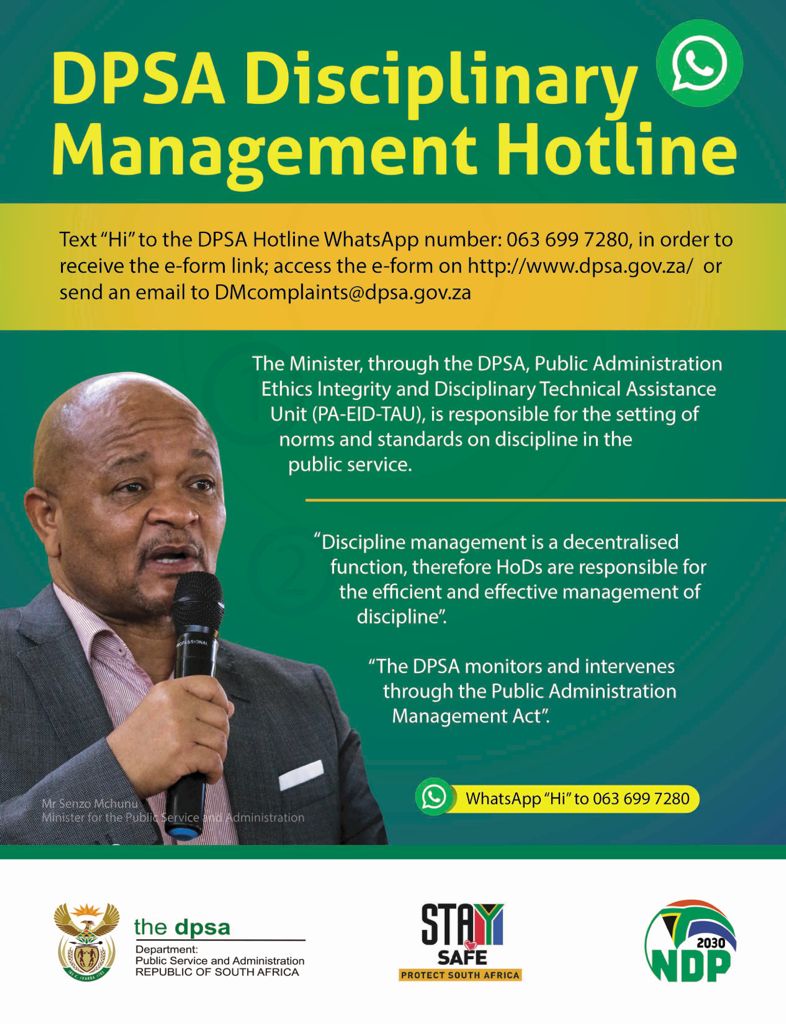 The government has officially unveiled the Discipline Management Complaints Hotline through which suspended public servants can make complaints and report all forms of bullying and victimization by their supervisors.

On Friday, April 16, 2021, Public Service and Administration Minister, Mr Senzo Mchunu, launched the Hotline, where public servants will channel their complaints through the hotline by texting “Hi” via Whats app to 063 699 7280.

According to the Minister, this will be a platform, which will enable public servants on prolonged suspension to report incidents of bullying and victimization by their supervisors, pending finalization of their disciplinary cases.

Minister Mchunu further said public servants can also use the link for the e-form which they can access on http://www.dpsa.gov.za/  or by sending an email to DMcomplaints@dpsa.gov.za .

He said the link for the e-form would be accessible 24 hours a day, on any day of the week.

Public servants can also call 012 336 1349, during office hours (9 am-4 pm) on weekdays for inquiries as well as to obtain clarity on the e-form or to follow up on the status of complaints already submitted.

“The Hotline service, set up under the Public Administration Ethics, Integrity and Disciplinary Technical Assistance Unit (PA-EID-TAU), will allow public servants to engage directly with the department.

“It will further assist the department to monitor the type and trends of complaints received in the public service and devise strategies to improve discipline management policies, capacity building interventions, oversight as well as norms and standards.

Nthambeleni Gabara - Modified date: July 14, 2021
0
The journey towards the much-awaited 19th Public Sector Innovation Awards has officially begun with an open call for entry to innovators in all...